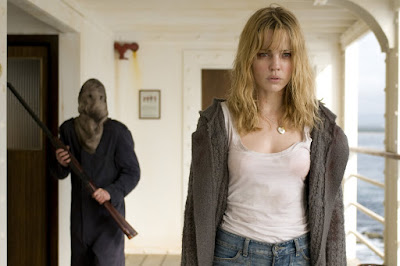 Christopher Smith’s Triangle just hit DVD/Blu-Ray and Netflix Watch Instantly in the U.S. I first heard about the film on my own podcast, as my co-host Adam Quigley suggested it’d be a good watch for people who enjoy twisty, time-travel flicks. Eight viewings later and I still can’t get this film out of my head.

A lot of that is due to Melissa George’s amazing performance. I’m also in love with the chilling score by Christian Henson and Dot Allison. Other things I really like about the movie:

Right after I saw the film, I called up Adam Quigley to discuss the film, and recorded our conversation. You can download it (Right-click and “Save As”) or play it in your browser below:

Since this conversation, I’ve had a lot more time to think and read about the film, and feel differently about it now. As “The Dude” once said, “New information has come to light, man.” One thing that /Filmcast listener Jim pointed out to me was the following:

I only caught a brief portion of Adam and Dave’s informal discussion about the movie ‘Triangle’ and I just wanted to see what your thought about the metaphysical aspects of the film. In short, I came into the discussion at about the point where Dave was saying something to the effect of how he preferred if the movie was more of a literal time traveling narrative while Adam was ok with the concept that the movie had more of a supernatural reasoning about the time manipulation. I, personally, found the supernatural clues in the movie more compelling and the notion that the main character’s journey in the movie was punishment or a purgatory.

The main thing I liked was that in the explanation of why Sisyphus was condemned to roll a rock up a hill was that ‘he made a promise to Death that he didn’t keep’. At the end of the movie *SPOILERS* after the car crash when the main character is shone walking around in a fugue state, a cab driver picks up the main character and she asks him to take her to the harbor starting the individual time loop over again. When she gets there, the driver says ‘he’ll keep the meter running’ and asks the question,’you will come back won’t you?” to which the main responses,’yes I promise’. I’ve always taken this to mean that the cabbie was Death (or Charon, the ferryman of the Dead) and that the main character has promised that she’ll be back. Since she breaks this promise by going on the boat, she’s forced to re-live a set of time loops until eventually she lives up to her promise to come back to the cab and the afterlife instead of agreeing to go on the boat and life the time loop filled half life she current inhabits.

This is a brilliant explanation that adds so much to the film for me. I’m only angry because I feel I’m a complete moron for having missed it earlier! Of course! Jess breaks the promise to the ferryman and that’s what completely screws her over. It puts the entire film in a whole new context.

In addition the Wikipedia entry on the film lays out the following explanation:

There are two distinct phases to the total cycle denoted by A and B. Events happening in these phases are similar but not identical. By having an A and B phase the audience is fooled into thinking that Jess is altering the cycle when in fact she is simply playing her proper role in the alternate phase. In each phase there are three versions of Jess denoted by 1, 2 and 3. The phase alternates between A and B each time all the minor characters are killed and the tertiary Jess character is thrown overboard. The surviving two Jess characters advance from primary to secondary and secondary to tertiary, respectively and a new primary Jess character boards the ship.

A phase: (Film focuses on A1-Jess)

Once the group is on the Aeolus they read about the story of Sisyphus at which point A2-Jess drops her keys and the keys are found by the group. The entire group enters the ballroom of the ship where A1-Jess catches a glimpse of A2-Jess. Victor runs after A2-Jess and ends up outside where he is confronted by A2-Jess. A2-Jess accidentally fatally injures Victor. A3-Jess has her character shift and becomes the masked killer.

Gregg and Jess walk away from Sally and Downey and discover the note written in Downey’s blood to go to the theatre. A1-Jess walks away from Gregg and heads for the ballroom.

Sally and Downy are told to go to the theatre by A3-Jess. On their way they see blood trails from where A3-Jess dragged Greg’s body out of the theatre. A1-Jess kills Victor in the ballroom after he attacks her. We are tricked into thinking A1-Jess then runs to the theatre but in fact A2-Jess shows up in the theatre. This is because after escaping the theatre unharmed this Jess obtains a knife. This knife is used by tertiary Jess in the next cycle to attack Sally and Downy in the bedroom.

A3-Jess kills Gregg, Sally and Downey in the theatre while A2-Jess flees the theatre and gets the knife. A2-Jess, with the knife, is on the top deck of the ship and is heard running by A1-Jess who is immediately attacked by A3-Jess. A2-Jess has no further role in the A cycle. A1-Jess eventually wins the struggle and throws A3-Jess overboard. The cycle is complete. A1-Jess becomes B2-Jess. A2-Jess becomes B3-Jess.

B phase: (Film focuses on B2-Jess)

B2-Jess resets the skipping record and then sees the new group about to board the Aeolus. In the hallway she drops her keys for the new primary group to hear and runs into the bedroom to see the note to go to the theatre written in Downey’s blood. Downey was killed in the theatre in the preceding A phase so this note was made using Downey’s blood from the B phase that preceded this B phase.

B2-Jess fatally injures Victor on the deck then goes below deck, scribbles another note “If they board kill them all”, takes a shotgun and loses her locket down the grate. This scene shows the audience that Jess cannot alter the total cycle and is in fact playing her proper role in the B phase of the total cycle.

B2-Jess prevents B1-Jess from killing Victor in the ballroom. B2-Jess then saves Downey and Sally from being killed in the theatre where Gregg is killed. B3-Jess is grazed in the head by B2-Jess.

B2-Jess gives Downey the shotgun and goes to look for Victor. She returns to the ballroom where his body has been thrown overboard.

B3-Jess tricks Sally and Downey into following her into a bedroom where she attacks them using the knife she obtained as A2-Jess. Sally escapes with a fatal wound to her chest while Downey is killed.

B2-Jess searches for Sally who makes the distressed call to the next primary group. She finds Sally amongst a pile of dead Sallies and gives her the brown jacket.

A phase: (Film focuses on A3-Jess)

A3-Jess has a character shift when she realizes that she must kill everyone in order to save them. She goes below deck and writes “Go to the theatre” in Downey’s blood before dragging his body out of the bedroom and throwing him overboard. Next A3-Jess drags Gregg out of the theatre. Victor’s body has already been disposed of.

A3-Jess tells Sally and Downey to go to the theatre then leaves to get another shotgun and become the masked killer.

A2-Jess is on the top deck of the ship with the knife and is heard running by A1-Jess who is immediately attacked by A3-Jess. A2-Jess has no further role in the A cycle. A1-Jess drops down one level and grabs an axe. A1-Jess attempts to distract A3-Jess by throwing an object. A3-Jess remembers having done this when she played the part of A1-Jess and cuts her off. A3-Jess ultimately loses the struggle and is thrown overboard where she washes up on shore.

Jess goes home and we find out that the real Jess is abusive towards her son. The real Jess is killed by Sisyphus-Jess. In an attempt to escape the loop she puts the body in her car, takes her son and flees. She hits a seagull and throws its body onto a pile of dead seagulls. She gets back into her car and is involved in a head on collision with a truck. She escapes ‘unharmed’ and is greeted by a taxi driver. Sisyphus-Jess is in fact already dead and the entire film has taken place inside her constructed punishment.

It is likely that the loop started when real Jess, distracted because she was abusing her son, died in the head on collision along with her son. After dying, real Jess becomes Sisyphus-Jess. The cab driver, playing the role of Hermes, escorts her to the harbor where she will join the next primary group about to board Aeolus.

I’ve gone through this explanation (SLOWLY) a few times and I’m not entirely sure that the notations are consistent. But it at least seems as though there’s one plausible explanation in which this film could make sense. What do you think?